First full day started with breakfast at Charlee’s, which I would do every day of my stay mostly because it was included but it was also pretty decent food with an incredible view.

Charlee’s open-air restaurant was located next to the lobby with seats fronting the narrow street and sidewalk. I sat, and would always sit, closest to the sidewalk in the seat giving me the best view of Parque Lleras. From there I watched students, joggers, dog walkers, street cleaners and young women in yoga pants on their way to the gym. But there were also the street vendors and I would learn that they never sleep. Candy, Colombian soccer jerseys, hats, homemade deserts, and donation requests for homeless Venezuelans are mercilessly offered 24/7 to gringos. The restaurant at 5 feet above ground level and separated by 3 feet of shrubbery and a metal railing was no deterrent to their overtures.

I ordered Tipico Aburra which was the only meal I never had an interest in trying again. No complaints just nothing special and it was confirmation on how few spices are used in Colombia.

Then I was off to see Juan Carlos, the Dentist. I took a cab up a steep and windy road. San Francisco has quite a few roads like that. Medellin has many more. The office was in a large commercial complex anchored by the city’s main grocery store chain, Carulla, which I would end up going to many times.

The office and staff were professional and I was promptly seated in the dentists chair. Hard not to like Juan. He was jovial, professional and spoke English well. He quickly rejected my previous dentists’ claim that I needed two crowns. He agreed that one tooth required a crown but the second simply needed a filling – a crown for the second was overkill. Meticulous and thorough Juan worked on me for next 3.5 hours.

I was very hungry and restless when I left and I didn’t have a plan for lunch. Bad idea. I Uber’d back down the hill and went to the only place I knew, Mondongo’s, for the second time in two days. I didn’t have a meal lined up and couldn’t get the wifi to work in order to see the menu so I panicked and ordered their namesake soup: Mondongos soup. Which is tripe soup, which I did know going in.

I ate 10 bites quickly and I thought ‘this isn’t so bad – maybe I like tripe’. When I tried to continue I found I couldn’t. I had reached my tripe limit. I worked my spoon in vain trying to gather anything other than tripe but it had been diced so small my efforts were futile. If you like tripe my guess is that you would love this soup. For those, like me, all you need is a few bites and you will end up paying your bill and leaving most of it behind.

After a quick stop at the Hotel to freshen up and charge my iPhone I was off to get complete dental X-rays at the mall. Juan Carlos Juan Carlos armed me with the order form and directions – “it is across from the McDonald’s”. X-rays cost me $23. So hard not to repeat “Juan Carlos”.

I had no plans after that so I walked around the mall. I came across a brightly lit cell phone repair shop and I stopped, it was time. My iPhone 6s needed a new battery 3 years ago and if I wanted any photos of this trip past the first 30 minutes of leaving my hotel I needed to do it. I dropped the phone off and was told to come back in 1.5 hours. I walked the mall again. Then I walked around the outside of the mall. What to do? I paid for a mani-pedi to the delight of two smiling ladies and for the next hour they worked hard while they pointed and laughed at me. I had no idea what they were saying but I did convince a third lady to take a photo of the session and text it to me. Near the end, the pedi lady rested her arms and sighed, wiped the sweat off her brow and pointed at my size 15 feet with her 18 inch industrial file and shook her head with a “what the hell” expression. I don’t do this very often so I tipped them both equally and generously. I walked back and picked up my iPhone with my glistening fingernails and was satisfied with my day. And I still had dinner.

Tonight was to be my first fancy dinner and it would end up being my favorite meal of the entire trip – if not life. The Carmen’s five course tasting menu.

Second dish was pulpo (octopus), unusually small potatoes and Colombian sour cream paired with a Chilean Sauvignon Blanc. Very good. Second best pulpo after the one I ate in Italy.

Then came the seabass with panko butter topping and topped again with dollops of butter on a bed of buttered noodles in a veggie broth with house bread and sour cream paired with another white wine. I sent the white wine back before it was poured in favor of an Argentinian Malbec which was perfect. Seabass was amazing. And buttery.

Next was pork belly with black kale and sweet potato puree paired with a young “but bold” Italian red as described by my waiter. Wine was great. Pork belly was good and the black kale was amazing.

To end the meal I was served loganberry and mango ice creams with a Colombian white chocolate over powdered tapioca and lychee sauce and strawberries. I had been concentrating on my waiter’s every word throughout the meal and while I sat back proud of myself for understanding any of it he started describing the paired cocktail. Though the description was even longer I spent most of it trying to catch up and was left with only one comprehensible word – “hibiscus”. Possibly rum with fruit juice – no idea? Cocktail was good and I wasn’t that impressed with the desert at first but it just kept getting better with each bite. Ended up loving it.

I could have easily gotten some of the descriptions wrong. Example: I checked the loganberry ice cream and on their website which says blackberry.

All this for $74. My most expensive meal in Medellin and definitely a top 10 meal of all time. For me this was the perfect place. Great atmosphere, great food and nothing needlessly complicated. I would put Carmen’s up against any restaurant. 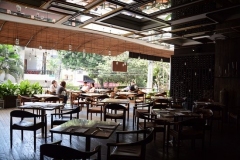 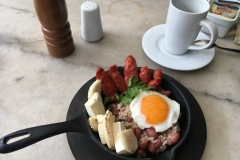 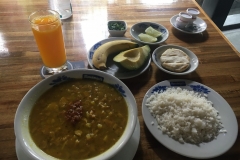 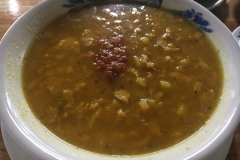 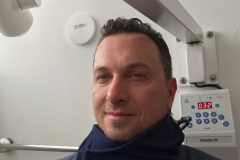 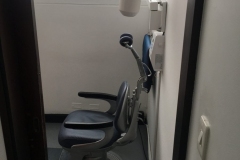 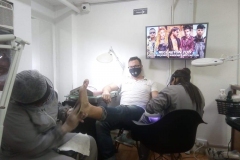 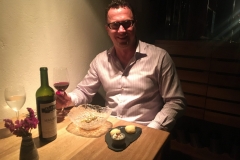 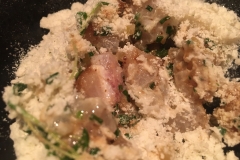 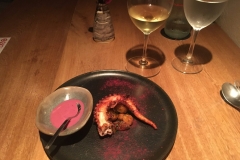 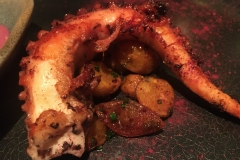 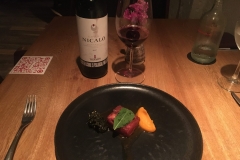 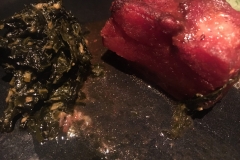 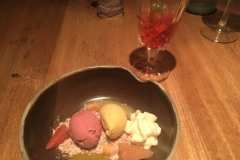 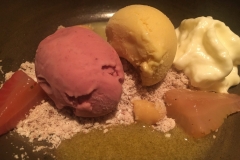 After dinner I went walking around Parque Lleras. It is not what I would call a family-friendly area. I went to a bar which was filled with attractive young women with unusually large features. All were very keen to have men buy them a drink (this is how they are allowed into the bar) and all were working hard to get into to your hotel room. I was talked into buying one drink for a lady, bought a coke for myself and then went home – alone.