I booked a walking tour with Real City Tours. The tour is around El Centro and lasts about 3.5 hrs.

I took the metro for the first time to the meeting place in El Centro. I can’t believe my buddy has been to Medellin 4 times and has yet to go on it. I love anything on tracks so I jumped at the chance.

Colombia’s metro is strikingly clean and barren. Every stop, every car looks brand new with virtually no signage. After riding on mass transportation in many countries and cities I have never seen anything like it. The stops did have a couple of ad banners but the cars had none. Virtually no signs of any kind – no graffiti, no ads, no maps, no safety messages, nothing. I did eventually find two very small stickers: one was instructions on releasing a lever, and the one I think was the car number. There were, however, hundreds of stickers of shoe prints on the floor indicating where to stand. I assumed it was due to the COVID but because they were about 24″ apart they made me smile.

I was the first one to arrive and met my guide, Hernan. Two other off-duty guides started with us as well and though they mentioned that they would be leaving didn’t do so until late in the tour. I think they just really liked their job.

Hernan is highly educated with various degrees in science and art. He epitomized for me what “highly educated” used to mean: a combination of intelligence, study and wisdom. No mental gymnastics to contort reality by changing definitions or swapping exceptions for the rule. Just highly informed knowledge. I could listen to Hernan for days.

He delivered a vivid retelling of Medellin’s history. More than that he was passionate and proud of his City and multiple times I even became a little verklempt. He repeated his stated goal of providing an honest history of the City with “warts and all” a few times during the tour and he definitely achieved it. I left with a very different view of Medellin and a desire to learn more.

I will try retelling one of his simpler informative stories as both an example and the one that may best epitomize Medellin culture. For context our group is standing in front of the former judicial building in the middle of a pedestrian only intersection surrounded by street vendors. (I have a picture of the area below).

Hernan talking to the group.

These now pedestrian roads used to be for cars but long ago one street vendor pushed his cart further out into the road which restricted normal traffic. When no one stopped him he told his friends to join him and together they pushed their carts until all traffic stopped and it became pedestrian only. It just happened, no ordinance no variance, and this all happened directly in front of the court house.

Imagine this line running down the center of this now pedestrian road is the dividing line between legal and illegal. In many cultures you have comfort in standing here, on the legal side, and you know exactly where the line is that you shouldn’t cross. However, in Medellin, we are very comfortable doing the salsa all day long directly on the line. (Hernan now doing a very good salsa on the line). In the remaining two weeks of my trip whenever I would be confused by Colombian culture I would recount Hernan’s tale and it all somehow made sense.

I tried an empanada and a bunuelo for the first time in Medellin during the tour. Hernan agreed with me that the empanada I got wasn’t right but I did like the bunuelo. I was one bite into the bunuelo, which was an amazing semi-sweet doughnut thing, when an older needy lady approached. I quickly gave her the second uneaten empanada and after a few seconds handed over the rest of the bunuelo. I hope she enjoyed it because it was the only one I had the whole trip!

I also met Tim, blue shirt and black backpack shown below. We exchanged numbers and ended up doing the Barrio tour together.

I thought I took more photos. I get better. 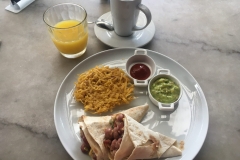 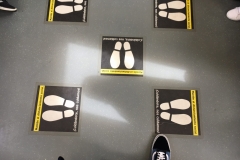 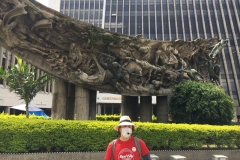 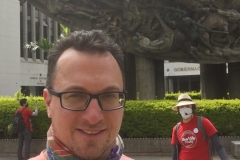 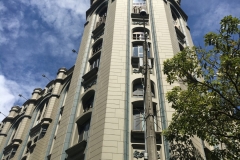 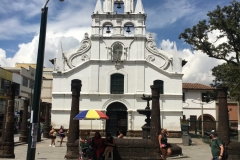 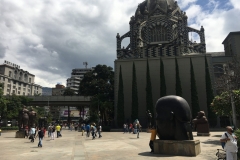 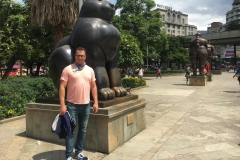 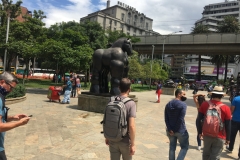 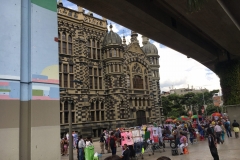 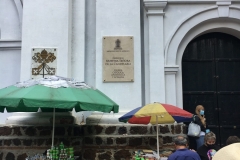 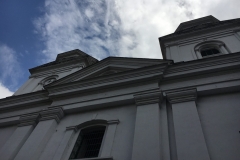 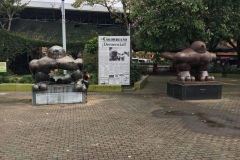 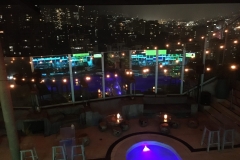 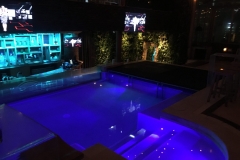